Quick Reviews: Where I briefly play a game and then talk about it. Usually reserved for indie games that are part of bundles you can buy right now. Without further ado... 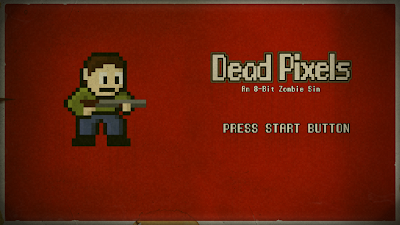 A toxic waste spill finds its way into the water supply causing the recently deceased rise from their graves. Now you have to shoot your way through the hordes of undead to reach your only hope for survival. On the way to your rescue you will have to search stores and houses for supplies, and trade with other survivors.
With three game modes, hundreds of items, weapons and grenades, and a city that is never the same twice, there is always something new hiding round the corner in Dead Pixels.

That is from the website of this game and honestly that's all the story you really need. It's a zombie game, we've all played one before. But I doubt not many people have played a zombie game like this...unless they've already played Dead Pixels. It's currently available on the Xbox Live Arcade, and very recently on Desura where you can buy it for £1.99. In my brief playthrough of the game I can tell you that it is worth every penny of that.

As you can tell from that screenshot, this game has got a retro feel to it. The gameplay is reminiscent of side-scrolling shooters as well as 'River City Ransom', each zombie you kill drops change and you'll pass by shops who will sell you new weapons, ammo, grenades and med-kits, everything you need for the zombie apocalypse. In addition, some buildings you pass by that aren't boarded up (or marked with an "X" painted in blood) can be looted, usually for selling fodder though you can occasionally find a decent weapon in them.

The objective is to get to "da choppa" in order to escape the zombies. You must get from one side of the street to the next, killing any zombie that gets in your way. With each 'street' you pass, the zombies get stronger, more plentiful and shops become less common. In short, try and stockpile a lot of everything you need as early as possible, as you might run out of ammo in an inconvenient place and have to have to run like hell to the next level (not that I'm speaking from experience or anything...ahem). The game's length is determined by your difficulty, on Easy you must complete ten streets, Medium it's twenty, Hard it's thirty and on 'Hardest' it's still thirty but everything is harder. I settled for Normal, and I seemed to be doing okay until I ran out of ammo because I'm an idiot.


I'm so used to playing games where I just hoard most of my money that I was a little too stingy in the first few levels, so when shops became rarer I wasn't prepared. So, in short, when it comes to ammo BUY, BUY, BUY! But also sell your worthless goods because each item has a weight amount, go over 100 and you will move like your encased in jelly and you will probably end up getting eaten a little bit. You can also buy upgrades for your character in these shops, if you have enough spare cash. Also, in each 'street', the shops will ask for a certain item that you can sell for mega bucks. If it's not too heavy, it might be worth your while to carry at least one of everything you see, just in case.

One nice thing this game does is give you the option to use a variety of gamepads, including the old wired Playstation controllers (providing it's a dualshock). It's the first game I've played that has given me this option for that I must commend the developers!

Is there criticisms? Well, yeah, sometimes the shooting feels a bit sluggish and slow, but that might either be a performance issue (because my computer is terrible, though not THAT terrible...) or by design (because they were early guns). And the other criticism is...umm...that there isn't much else for me to criticise about. God damn it CSR Studios, don't you know I have a complaint rota to meet?

The soundtrack is pretty nice as well and it is available for free from their website which is here if you missed it earlier.

Now, some of you are probably thinking "hmm, wait, but I want to spend AT LEAST £3.27 on this game, and I want other games to go with it!". Well, you're in luck! Dead Pixels is a part of the most recent 'Indie Royale', a fortnightly bundle of Indie Games. It lasts for another 2 days and 15 hours at the time of writing. If you want to take a gander go right here: http://www.indieroyale.com/

You can find trailers for Dead Pixels as well as the other games in the bundle. For £3.28 (or more if you're so inclined), you can't go wrong. Heck, this game might be worth that alone.